Today's Living Lovely with Family at Mt. Hope Chronicles asked for ways we celebrate milestones: "achievements, graduations, birthdays…how do you mark milestones with your children?"

Achievements: We don't do much except verbally congratulate our kids. We've never been much into rewarding them with "things" for jobs well done. Most of the time, it seems that the achievement itself is enough for our kids. For example, our daughter will be moving from one level in American Heritage Girls to the next level in a few weeks. Her celebration will be walking under the archway, having her vest taken off by us, and having the next level girls put on her sash. Then again, our oldest son will be getting his Eagle Scout next fall. That will be an achievement we mark with a ceremony and reception completely focused on him. But we haven't reached that milestone quite yet... 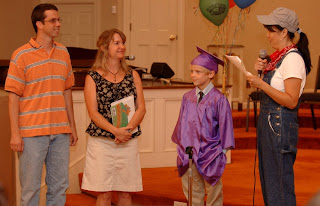 Graduations: Here in the South, we have kindergarten graduations. I'd never heard of such a thing until I moved here and I did roll my eyes secretly when I heard of such a thing, but I have to admit it's really sweet. Our homeschooling support group has a fantastic graduation ceremony each year. The picture above is from Duncan's two years ago. And next year we'll graduate our first high schooler! I have no idea how we'll celebrate that milestone. Where I grew up in upstate New York, graduation parties were the thing. It was unbelievable. Pretty much every weekend of the summer, someone was having a graduation party. These were huge parties with the big white tent and huge amounts of food—and were basically open to anyone who even remotely knew the graduate. (Of course at a small school, everone knows everyone anyway.) Those were awesome parties. I believe it's customary here to do something on a much smaller scale. I'll be looking into that.

Birthdays: First of all, we do not do school on birthdays. That's a big celebration. And we have one very important tradition. On the night before the birthday, Randy and I print out about a dozen of the birthday child's new age (16 was the most recent) in big, colorful numbers and tape them all over the house. This started sometime when our oldest was little, and we can't seem to stop. Even right now there are a few "16s" left around from Jesse's birthday 3 weeks ago. It's a common in March, August, and December for visitors to ask: "Why are there numbers all over your house?" Another birthday tradition is to take the birthday person out to dinner at his/her favorite restaurant. Since we rarely eat out, this is a huge treat for everyone. And of course I make a cake and the kids usually have a friend party.