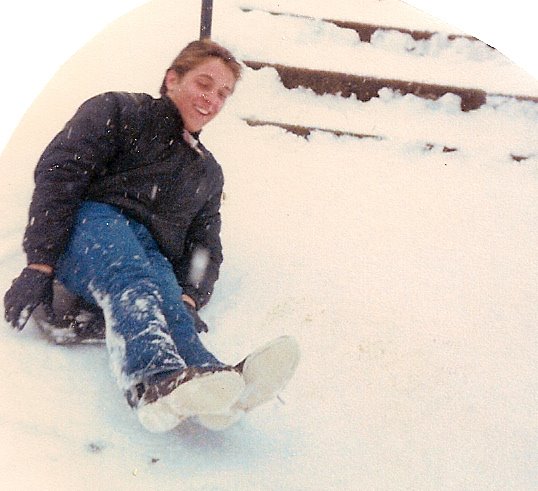 He was a liar, a cheater, a poseur. He was a drunk and a thief. He was offensive, amoral, and conniving. And he was my friend. He was brilliant and funny and sweet. He was a good listener and smelled of Paco Rabanne. He was witty and bold, artistic and promising. I met Randy Landry during freshmen weekend at college. He had followed a girl to college, a girl he'd met at church camp. He wore an argyle sweater and shiny penny loafers. (He would deny, later, ever having worn such things, but I have pictures and a very good memory.) The girl lived across the hall from me, and we became friends. It soon became clear that she was not interested in him. Still he followed her around, courteous and devoted. He was going to be a youth minister and marry her. (He would deny this, too, later. Both parts.) She brushed him off like a shoulder full of dandruff. 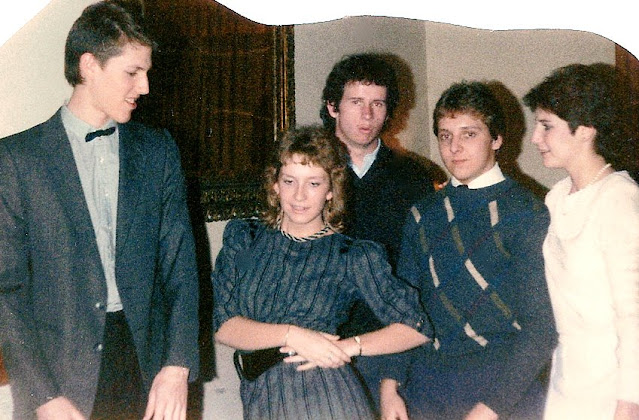 And then he was my friend, not hers, and a better friend than the girl he followed. Soon we were a group of six or so, spending all our time together. Late nights studying, roaming around campus, wildly enthusiastic, we all were, about discovering everything new, on our own. He was, more than anything, sharp-witted and funny. He was always in the middle of all the action, always ready to have fun. Clearly, he drank too much; we learned that within the first few months of college. But he was my friend, and he would have done anything for me. Mostly, he listened. I can hear his voice, still. A bit of a munchkin sound to it. He couldn't carry a tune, and like most people who can't hear a note, he didn't know it. 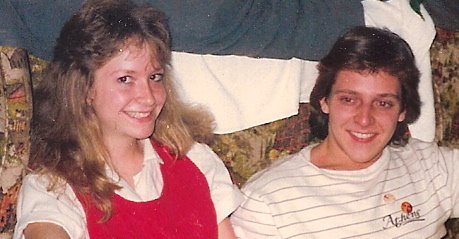 Girls liked him. Some girls. I never knew why: he was short and barrel-chested with skinny legs. But he had a nice smile and beautiful eyes, and he could be charming and very, very funny. And sometimes, before he started drinking too too much, he smelled good. Sophomore year I fell in love with his roommate (who would ultimately become my husband). The next years become fuzzy, but randy is always there. In nearly every scene in my memory, he is there, somewhere. Whatever the state of my heart: broken or ecstatic, he was there to cheer me on or let me cry. He was always reassuring me in some way, although he had demons knocking his own door down. He had fallen hopelessly, helplessly in love with one of our entourage, the beautiful Debby. He followed her around everywhere, helped her write papers, and soon became known as "Quiet Desperation" by some of the snickering upperclassmen. 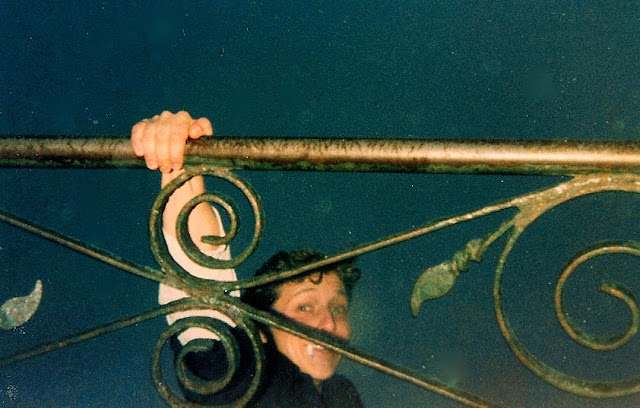 I liked him less and less each year, although I loved him. He seemed to shrink each year, eyes red-rimmed and face scruffy. His black trenchcoat and shabby shoes. He was the black sheep of the family, walking right along the edge of the cliff, barely hanging on. A photograph comes to mind: on vacation one summer, we visit Niagara Falls. He decides, suddenly to climb over the iron fence. I snapped a picture of him hanging by one hand above Niagara Falls, cigarette dangling from his mouth. I could have stomped on his hand and set him free to slide down the falls. He had a penchant for badly masked plagiarism. Once he gave me a pile of poems to read. I scanned each one; all sounded familiar. Then this one jumped out at me: "Not even the snow has such fragile wrists," the last line read. "Randy," I said. "This is e.e. cummings! This is "Somewhere I have travelled, gladly beyond!" I cried in disbelief at his blatant copy. Totally seriously he looked at me and said, "I've never read e.e. cummings." It was at this same time that he began signing his name as "randy landry." 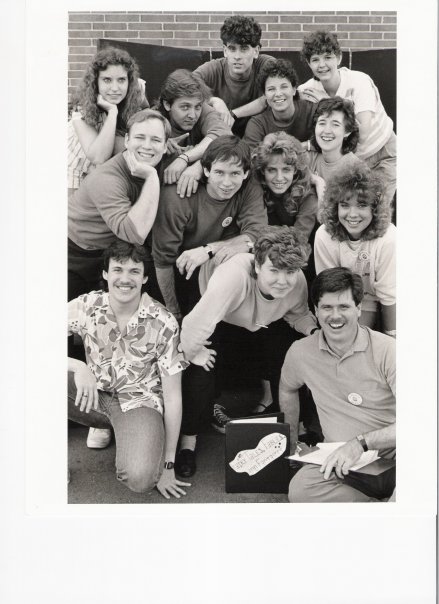 He drove us all crazy, but we loved him and cared for him, even as our disgust mounted at times. He was often rude and mocking, then penitent and kind. Clearly he was brilliant. He didn't need to copy Vonnegut or cummings; he was a graceful writer on his own. Ultimately he found his calling in the theatre department. Our college hired a new theatre professor, and randy adored him. Under Dick's tutelage, randy started focusing. He was a gifted director. Could have been Something. Could have been Someone. But. 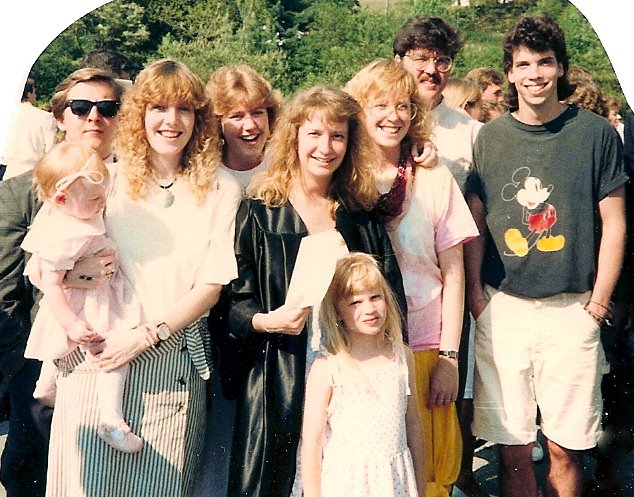 Although we came in as freshmen together, somehow randy didn't graduate with me. I'm not sure what happened; perhaps he simply stopped going to classes. He became sloppy. But he was devoted now to theatre, and he spend that summer after my graduation working at the Barter Theatre. One weekend we went to see a play and visit him. At his tiny room we opened his refrigerator for a snack—nothing but beer. Still, you can justify that when you're just a summer intern.
We moved on. Randy was one of the groomsmen in our wedding; he showed up with the stale smell of alcohol seeping from his pores. I cringed to watch him walk my mother up the aisle, with his eyes red-rimmed and his arm shaky.
We moved on again, into a life of graduate school and babies. We lost touch for the most part, talking on the phone once or twice each year. A decade later, we visit him in Marion, Illinois. He has gone back to his home state, always on the cusp of getting something going: a new theatre company, a directing position, anything but what he really was: a waiter in a sleazy restaurant in a sad little town in the midwest. His apartment was filthy and decrepit. I fought the urge to run, find a hotel room to sleep. He gave us his bed. All night long he passed through the bedroom on his way to the kitchen, one beer can popping open after another. I was tormented by my disgust. This mumbling, stumbling drunk had once been my confidante, and all I wanted to do was get far, far away from him.
Every Christmas Day for 15 years he called me, no matter where I was living, no matter where he was living. One year the calls stopped, and I didn't think about it. I didn't think about him much at all anymore.
And then one day Robert sent an email with a link to his obituary.
Randy Landry, age 40. Died at home after a short illness. And that is all we know.
Three years ago he died, and somehow it is this year—the year of my 20th class reunion— that it all comes back to me.
I remember the soft feathering of his hair and his scuffed Docksiders. I remember his thin army jacket and the way his smile curled up slowly on one side. The way he'd burst out laughing. How he always had faith that my Randy and I would end up together, in spite of all the drama. The scrawl of his poems on notebook paper.
And so, for randy:

somewhere i have never travelled, gladly beyond

Somewhere I have never travelled, gladly beyond

any experience, your eyes have their silence:

in your most frail gesture are things which enclose me,

or which i cannot touch because they are too near

your slightest look easily will unclose me

though i have closed myself as fingers,

you open always petal by petal myself as Spring opens

or if you wish be to close me, i and

as when the heart of this flower imagines

nothing which we are to perceive in this world

equals the power of your intense fragility: whose texture

compels me with the colour of its countries,

rendering death and forever with each breathing

(i do not know what it is about you that closes

and opens; only something in me understands

the voice of your eyes is deeper than all roses)

nobody, not even the rain, has such small hands.

Rest in peace, my friend.
Posted by Sarah @ Sarah at SmallWorld at 10:01 PM