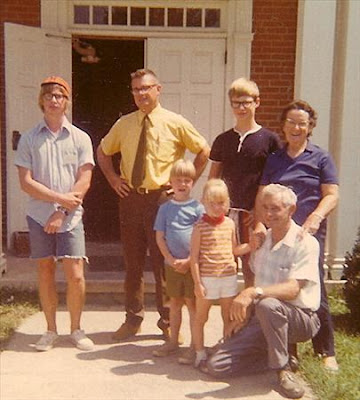 We took our oldest son to college this past weekend (an event that will have its own blog post, as soon as I can do that without weeping), and of course Dr. H. and I got to talking about our own first weekend in college. He remembers his parents bringing him to college, but I don't think it ever crossed our minds that my parents would bring me to college. My 4th brother was a junior in the same college my freshman year, and my 3rd brother and his wife were dorm parents at the college (not in my dorm). I guess I had enough surrogate parents to suffice.

Apparently we did, however, take my 2nd brother to college. I remember this very vaguely. I must have been 5, Stephen 7, and Peter 14 when John began his freshman year. I'm not sure why my grandparents were there with us. What kinds of things were going on in our family then? Stephen and I were so little. We were perhaps still after-thoughts in this already formed family. Maybe they were all still getting used to us being around. And looking at this picture, I realized that my Granddad must have died just a few months after this, or at least within a year.

Do you have a Monday Memory? Leave a comment so I can check it out!
Posted by Sarah @ Sarah at SmallWorld at 7:24 AM